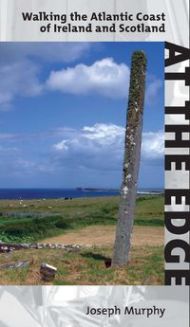 At the Edge- Walking the Atlantic Coast of Ireland and Scotland by Joseph Murphy, Sandstone Press, Dingwall, 2009. With Endorsement by Alex Salmond, First Minister.

In the summer of 2006, Joseph Murphy spent three months walking 1500 km along the west coasts of Ireland and Scotland.

‘At the Edge’ is a record of JM’s journey, blisters and all. In itself the book is a very very good read. But is more than just a good read, it is a book which points beyond itself to difficult and challenging questions for the Radical Independence Campaign, Scottish Greens and community focused environmental campaigners.

In this review I will only be able to give a rough sketch outline of the questions raised by ‘At the Edge’. However, Joseph Murphy now lives in the Glenkens and is Professor of Environmental Studies at Glasgow University Dumfries. I suggest that it would be very useful for RIC Dumfries and Galloway and/or Dumfries Galloway Green Party to invite him to give a talk at a meeting.

Back to the book. I will start with a quotation from it.

Community must be the focus for sustainable development on this coastline. Through community social, cultural, economic and development goals can be achieved simultaneously. By this I mean equitable distribution of wealth, meaningful participation in decision making, secure and rewarding employment, flourishing of an indigenous language, social inclusion and the protection of nature. These are the things which make up sustainable development in practice. Focusing at other levels- individual, nation or world- often leads to none of them being achieved or some of them at the expense of others. The communities I walked through may not be sustainable on all criteria today but many are doing very well and they are the most likely vehicle for achieving sustainable development in the future. The politics I would have in mind would have self -determination for communities at its heart. [pages 349-50]

The particular communities JM has in mind here are the Gaelic speaking ones he visited in Ireland and Scotland. In these communities he found examples of resistance to unsustainable development – for example to a Shell gas-pipeline at Rossport in Mayo (pages 109-118), to a super-quarry on Harris (pages 321-328) and a large scale wind farm on Lewis (pages 337-340). At the same time, although perhaps more in Scotland than in Ireland (which in 2006 was still experiencing an economic boom) the challenge of opposing unsustainable developments encouraged the communities affected to think seriously about sustainable development. This in turn prompted community land buy-outs.

Unfortunately for the rural south of Scotland, the book identifies the survival of Gaelic as a significant factor in the ability of these communities to both resist inappropriate developments and develop sustainable alternatives to such developments.

The deep structure of ‘At the Edge’ revolves around the difficult to translate Irish Gaelic deoraíocht ‘exile’ and the Scottish Gaelic dùthchas ‘sense of place’. In the book the tension between deoraíocht and dùthchas is explored and revealed as part of Joseph Murphy’s family history- English born but with Irish speaking grandparents- and through conversations with the people he met on his walk mixed with the ancient and recent religious, social and political histories of the places he visited.

At the time Joseph was not aware of Galloway’s interesting history as a formerly Gaelic speaking region or, as he has told me, he would have made a diversion into Galloway as part of his walk. Perhaps it is just as well since such a diversion may have created confusion. Although Galloway did not experience the extreme dislocation created by industrialisation in Ayrshire and Lanarkshire in the nineteenth century, by the time of the Galloway Levellers in 1724 the dùthchas which had led Galloway’s ‘native kindreds’ to support John and Edward Balliol as their special lords and kings of Scotland against rival claimants Robert and David Bruce had long since passed.

So while Gaelic poet Duncan Ban Macintyre composed Oran nam Balgairean ‘The Song of the Foxes’ in response to the Highland Clearances, containing (in William Neill’s translation) the lines

The customs that were followed
They have perished now in Gaeldom

the Galloway Levellers saw their clearance from the land as an attack by the rich against the poor.

The lords and lairds they drive us out
From maillings [rented lands] where we dwell;
The poor man says, ‘Where shall we go?’
The rich says, ‘Go to hell.’
Against the poor the rich prevail
With all their wicked works,
And will enclose both moor and dale
And turn corn fields to parks.

In none of the various texts produced by the Galloway Levellers is there any hint of dùthchas. Indeed, as this except from one of the Levellers’ printed pamphlets from June 1724 shows, they had no objections in principle to enclosure and improvement.

The Gentlemen should enclose their grounds in such parcels that each may be sufficient for a good tenant and that the Heritors lay as much rent on each of these enclosures as will give him double the interest of the money laid out on it. If he cannot get this enclosure set to a tenant whom he may judge sufficient, he may then lawfully keep that ground in his own hand till he finds a sufficient tenant, taking care that the tenant’s house be kept up and that it may be let with the first opportunity and that a lease of twenty-one years be offered. This will considerably augment the yearly rent of the lands and the tenant will hereby be capable and encouraged to improve the breed of sheep and black cattle and the ground, which without enclosures is impossible. 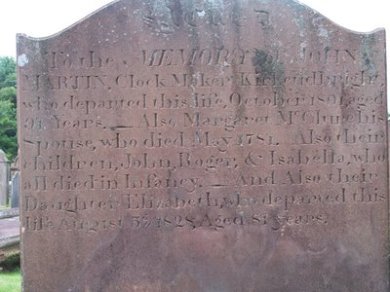 Gravestone in Kirkcudbright of John Martin, last of the Galloway Levellers.

But as well as lacking any sense of dùthchas, there is no feeling of deoraíocht in the historical awareness of the Galloway Levellers. Is this due to the loss of Gaelic in Galloway? If Gaelic had survived in Galloway would the Levellers have had a greater senses of being rooted in the land? Perhaps. On the other hand the Gaelic Lordship of Galloway lost its distinctive identity in 1388, when Archibald the Grim became the 3rd earl of Douglas. The Douglas earldom was dominated by Scots speakers and there was no Gaelic revival after its forfeiture to the Scottish Crown in 1455. Instead the Douglas land holdings in Galloway were gradually sold off to their tenants by the Crown. Through the sixteenth century and into the seventeenth, land -individual farms and small estates- and the produce of the land, became a commodity to be bought, sold and mortgaged. Galloway became an IOU economy based on the exchange of bonds. The Kirkcudbright Sheriff Court Deeds 1623-1700 record over 5000 of these bonds for sums as little as a few shillings to several thousand (Scots) pounds.

The Sheriff Court Deeds also contain about 400 tacks – leases- for farms which show that as well as farms changing hands through sale, there were regular changes of tenancy. Occasionally a new tenant would have to keep the existing cottars and their crofts, but more often the new tenant brought with him his own labour force of cottars. The cumulative effect of this commodification of the land was the loss of any enduring link between the people who worked the land and any particular piece of ground. Land ownership was also affected, so it was rare for the same family to own the same lands for more than two or three generations.

Kilnair, above Lochinvar, Dalry. From Gaelic cuil-an-air ‘corner of the ploughing’. Arable fields of oats and bere (barley) were recorded at Kilnair in the 17th century. It became a sheep farm in early 19th century and was abandoned by 1950.

In Galloway then, the patterns of the past had been broken for nearly 250 years by the time of the Levellers uprising. But if there was no dùthchas, why was there no awareness deoraíocht, of exile or alienation from the land and its cultural heritage? I suspect that the Calvinist Presbyterianism embraced by the population offered a substitute. In particular the religious symbolism of the seventeenth century Covenants gave the people of Galloway and the south-west of Scotland a powerful mythology. They could see their struggles against the Stuart kings reflected in the Bible, could imagine themselves as a Chosen People in Exile, journeying towards a Promised Land. The high point of the career of John McMillan, minister of Balmaghie parish and to the United Societies, was the renewal of the Covenants (National and Solemn League) at Auchinsaugh in Lanarkshire in 1712. 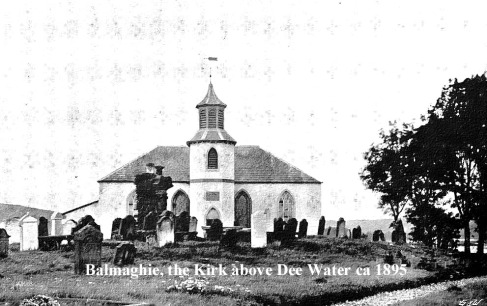 Today, the tide of religious belief has ebbed away in Galloway. Its history is scarcely better known than the history of Gaelic Galloway. In the absence of a distinctive language and religious traditions, what is that holds Galloway’s communities together? I am tempted to say -very little.

To go back to my opening quotation from ‘At the Edge’ –

Through community social, cultural, economic and development goals can be achieved simultaneously. By this I mean equitable distribution of wealth, meaningful participation in decision making, secure and rewarding employment, flourishing of an indigenous language, social inclusion and the protection of nature. These are the things which make up sustainable development in practice.

I am writing this review of ‘At the Edge’ just after a series of storms and tidal surges have battered Ireland and the UK At the same time, north America is in the grip of extreme cold. The probable reason for these extreme weather events is climate change driven by global warming. It is essential that policies of sustainable development aimed at drastically reducing carbon dioxide emissions are pursued. I agree that coherent and dynamic communities are well placed to practice sustainable development. However, the unsustainable development of market driven (capitalist) industrialisation has disrupted and fragmented communities in rural and urban areas. 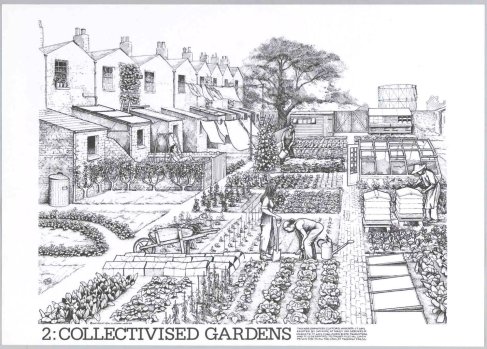 For the communities of ‘At the Edge’, Gaelic and its historical rootedness provide this counter-cultural narrative and a possible route towards sustainable development and community ownership of land.

In conclusion, I rather hope that Joseph Murphy is wrong about the importance of Gaelic in the abilities of communities to resist inappropriate developments and support sustainable developments. I hope he is wrong because if he is right, then the aspirations for – as an example- promoting community land-ownership in the rural south of Scotland, which have emerged from our regional RIC meetings, will be much harder to achieve. Perhaps it is more the case that the historical divergence between communities in the rural south of Scotland and communities on the west coasts of Ireland and Scotland has created a different culture of resistance, a different sense of solidarity?

I don’t know. What I do know is that ‘At the Edge’ raises questions which we need to discuss. 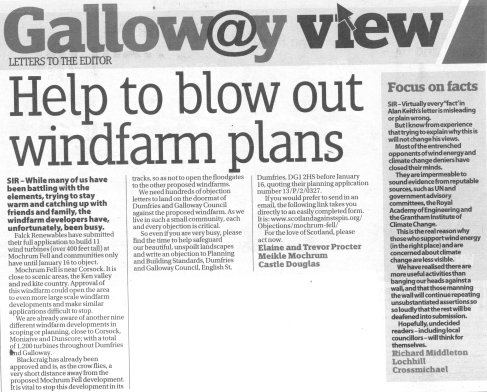 Letters in the Galloway News 9 January 2014 about wind-farms.

The day of the vote

What is the Radical Independence Campaign (RIC)?

The Radical Independence Campaign (RIC) was launched during November 2012 in Glasgow at a meeting attended by over 850 campaigners from various socialist, environmental, LGBTQI, women's and disability organisations, trade unionists, anti-cuts activists and members of the public. The aim of RIC is to campaign on an extra parliamentary, pro-independence platform which puts forward a vision of Scotland that is green and environmentally sustainable; internationalist and opposed to Trident and war; for a social alternative to austerity and privatisation; a modern republic for real democracy; committed to equality and against sexism, homophobia and racism. For more info about the national campaign, see www.radicalindependence.org

Numerous local groups have sprung up across Scotland following the RIC conference in Glasgow. While sharing the aims of the national RIC grouping, Radical Indy D&G is an autonomous organisation which will also campaign on local issues of relevance to communities across our region. We will further seek to intervene within the main RIC grouping to ensure that the issues affecting people in Dumfries and Galloway are addressed as part of the wider campaign. 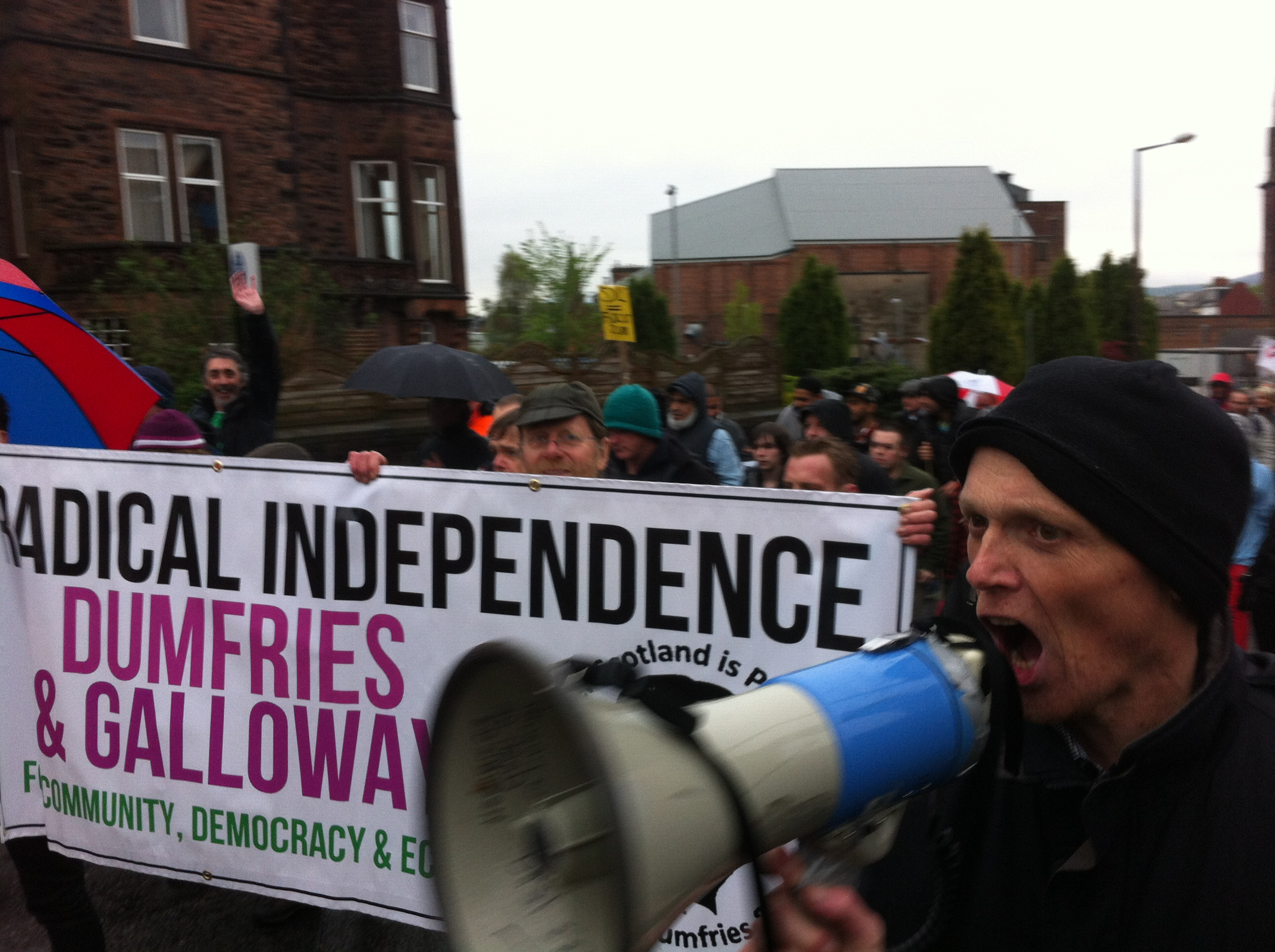